Thomas was born on December 15, 2008. We joked when he was born that he was our little tax break because he would only get to be outside the womb 16 days of the year but we got full tax benefits.

We discussed what we would name him. I suggested Thomas Andrew Zimmerman since Cassie’s father’s name was Andrew Thomas. She wasn’t sure but I believe several other people convinced her that it was a good idea. It would also be cute because his initials would be TAZ. We joked that if we had a daughter that we would name her Penelope Elise Zimmerman. That would make Cassie a PEZ dispenser.

Thomas was always a very chill baby. In the womb he never really kicked. It was a slow pushing if anything. And when it came time for Cassie to have her C Section he was just floating in there.

When he was born, Thomas was never the type to put random things in his mouth. I don’t know if he just knew or if he just wasn’t inquisitive in that way.

Thomas showed his brains early. We didn’t name him for Thomas the Tank Engine but he took to liking it quickly. One day one of the engines fell into the bookcase. Thomas couldn’t reach it with his hands. So he stuck an engine down there and used the magnet at the end to lift the other by its magnet. I wish I had that on video.

One thing that we used to have is season tickets to the New Orleans Hornets as a baby we dressed him up as a bee. He would make women’s ovaries ache. One time two women approached and asked me where his mother was. She was sitting right next to me.

One day I took Thomas to a game myself. This is a picture from that game. 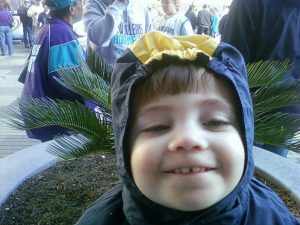 Thomas has given us many years of joy and will have several posts.