Well, if her favorite band gets a plug, I might as well give my favorite band a plug as well. I have been a fan of Rush since I was in middle school. The first concert I went to was the Roll the Bones tour. It was a great set list despite that album not being the finest of their collection. Bringing Cassie to her first Rush concert was definitely amusing. As it typical, most of their concerts tend to be a bit of a sausage fest. For a quarter of the men, it might have been the first time they had actually seen a woman up close that was not a blood relative.

She had a good couple of laughs during her first concert (I believe it was when she was a few months pregnant with Thomas at the time). During Spirit of Radio, there is a drumming part and pretty much every guy in the audience did some air drumming.

The next tour it didn’t appear that they were going to be coming to New Orleans. However, as luck would have it they were going to be in Tampa the day before we had already planned to go to Disney. They would be playing in what was known at the time as the 1-800-Ask-Gary Amphitheater (I only remember it because the name was just so odd).  So we leave a couple days early and for some reason I wasn’t paying as much attention as I should have to the speed limit and I wound up getting a ticket. So this turned out to be one of the most expensive Rush concerts. Thomas had been born by then. And one of the sweetest memories of the concert was when I was standing up and watching and he kinda tugged at my arm and wanted me to hold him. It was a great moment.

The next day they were going to be in West Palm Beach Florida. I was half tempted to get tickets to that show as well. However, I decided against it.

Of course shortly after returning home from Disney, Rush announced that they would be extending the tour and that they would go to New Orleans anyway. So, AWESOME! I got to see Rush twice in one tour.

We saw them a couple more times since then.  It was also funny. She was watching the movie “I Love You, Man”.  I initially wasn’t going to watch it, that is until i realized it was basically a Rush movie. I sat and watched the whole thing. 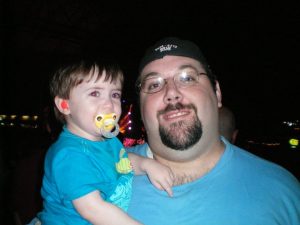