Cassie introduced me to Eddie Izzard. I had never heard of him before she gave me one a DVD to watch. I was surprised that I had never heard of him because his type of humor is right up my alley. So obviously when he was going to be coming to Tulane around our first wedding anniversary, I had to get tickets. I managed to land spots in the second row.  However, I had no option to print them at home.  It said I had to pick them up the day of the show at will call. I found this very odd.

We arrive to the show early to get the tickets. I give the person my information and we get our tickets. We then got our backstage passes for the meet and greet afterwords. This was the reason that the tickets had to be picked up at will call. Except, I had no idea that we were getting a meet and greet on top of the regular price of the tickets. The look on Cassie’s face was priceless.

We go to the meet and greet. They had food and an open bar. I said hello to John “Spud” McConnell (who had a part in one of his TV shows.

When we sat down to the meet and greet I asked a question:

“What is the stupidest question you have ever gotten at one of these question and answer sessions?”

Frankly that was probably the most perfect answer he could have given.

And then Cassie got to take a picture. 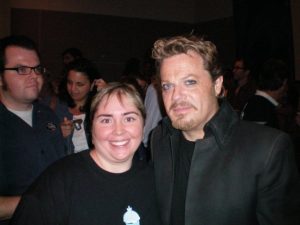 When we were walking back to the car, she called her mom and said “I have the best husband ever.” I just hope that I can always live up to that title.